Pyrometric Cones have been used to monitor ceramic firings for more than 100 years. They are useful in determining when a firing is complete, if the kiln provided enough heat, if there was a temperature difference in the kiln or if a problem occured during the firing.

Cones are made from carefully controlled compositions. They bend in a repeatable manner (over a relatively small temperature range - usually less than 40°F.) The final bending position is an indication of how much heat was absorbed.

Typically it takes 15 to 25 minutes for a cone to bend once it starts, depending on the cone number. The cone bends slowly at first but once it reaches the half way point (3 o’clock), it bends quickly. When the cone tip reaches a point level with the base, it is considered properly fired. This is the point for which temperature equivalents are determined. Differences between a cone touching the shelf and a cone at the 4 o’clock position are small, usually 1 or 2 degrees.

Cone bending may also be affected by reducing atmospheres or those containing sulfur oxides. Orton recommends the use of Iron-Free cones for all reduction firings (cones 010-3). If a cone is heated too fast, the cone surface fuses and binders used to make cones form gases that bloat the cone. If cones are to be fired rapidly, they should be calcined (pre-fired) before use. Cones should be calcined to about 850°F (455°C) in an air atmosphere. If a cone is soaked at a temperature near its equivalent temperature, it will continue to mature, form glass and bend. The time for the cone to bend depends on several factors and as a general rule, a 1 to 2 hour soak is sufficient to deform the next higher cone number. A soak of 4 to 6 hours will be required to deform two higher (hotter) cones.

Our own experience with Cones:

It's important to use the correct size cone for the job. There are 4 types of cones, Large Cones, (site cones), Large Self Supporting Cones, Small Cones (for kiln sitters), and small bars for your sitter, which we do not sell. The large cone is designed to be placed in either a Cone Holder or in your own cone pack. We have found we get the best results when we pre-bisquefire our own cone pack. This is only helpful when you are creating a cone pack to be fired to mid range temperatures such as cone 6.  Your target cone should always be placed in the middle of the pack, one cone below and one cone above should be placed on eithe rside of the target cone.

We have had many customers mention they sometimes use the tip of a large cone for their sitter, vice versa we have heard that small cones being used as site cones. This is not recommended. The cones are made specifically for their jobs. We suggest all customers have cones in their kiln rooms and periodically put them in their digitally controlled kilns to make sure your thermocouples and controllers are all in sync.

For more information on pyrometric cones, feel free to contact us at The Ceramic Shop or contact Orton at www.ortonceramic.com 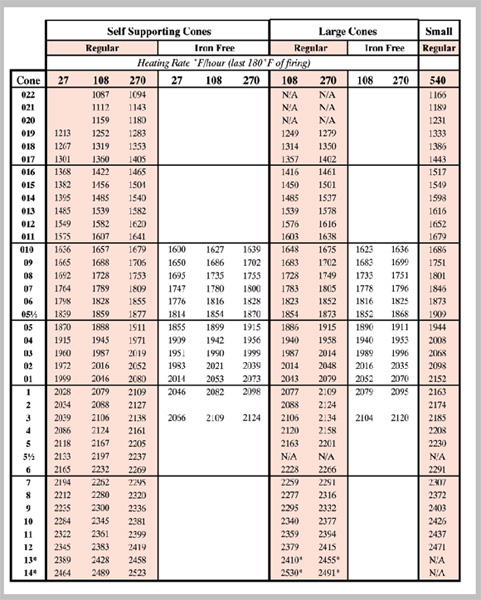